The store will not work correctly in the case when cookies are disabled.

The Spey cast is a roll cast that includes a change of direction. It allows the angler to make long casts without a lot of room for a back cast. The casting technique may be used with very long double-handed rods as well as more traditional single-handed fly rods. The advantage of making a fly cast with minimal back cast is as welcome on a tiny brook trout stream as it is on a large Western steelhead river.

The most common Spey casts include the “Double Spey”, “Single Spey”, as well as “Circle/Snap-T”, and “Snake Roll” which enable the angler to reposition their fly to make a static roll cast in a different direction. With these casts, an angler will be able to make a cast in any river position and in any wind condition.

As Spey caster Andy Murray once explained, “Spey is a river, and Spey is a cast. Rods are double-handed.” Double-handed rods vary in length from eleven foot “switch” style rods, to more traditional double-handed rods over twenty feet. The rod length required is directly related to the size of the river one is fishing. For example, shorter, switch rods of eleven feet are ideal for rivers that are forty to seventy feet wide where an angler might make casts up to seventy-five feet. Thirteen to fifteen foot rods are useful on rivers that are over one hundred feet wide and require casts of eighty to a hundred feet.

Large Michigan rivers such as the Lower Manistee, Muskegon, Grand, and St. Joseph are perfect for thirteen or fourteen foot rods. Smaller rivers like the Pere Marquette or Betsie Rivers are better suited to eleven foot switch rods.

Once you select the appropriate length rod, you’ll need to match it with a line weight that will properly load the rod. The line should then be matched with a reel that will hold the line and at least one hundred yards of backing. (Note: A standard single-handed 8 weight line weighs approximately 210 grains in the front 30 feet of the line. However, a comparable 8 weight switch line might weigh more than 500 grains.) Bear in mind that a reel to hold a double-handed line must have a much larger capacity than a comparable single-handed reel of the same line weight.

Double-handed tackle is then matched with a proper leader and tippet that will make the transition from the heavy line to the relatively small, weightless fly. Many anglers prefer the new “poly” leaders that have a much larger diameter than traditional tapered leaders. These enable the angler to add tippet suitable to the fly size, but are better suited to the much larger diameter of the switch or spey line.

Traditional Spey casting used a longer belly line with belly and head lengths of 55 to 85 feet. These are attached to at least 100 yards of backing. Medium or slower action rods with stiff tips that will lift long lines are preferred. This style of casting uses little shooting techniques and does not require stripping in line before making another cast. Additional room is needed for lifting a very large “D” loop and longer head. This style usually requires a higher skill level and more experience.

This method utilizes a 35 to 45 foot head that is attached to a very thin separate level running line that is usually 100 feet long. The level running line allows the caster to shoot long lines easily, but requires that the line be stripped in before making another cast. Scandi requires lifting a shorter length of line to form the “D” loop. This technique tends to be easier for less experienced double-handed casters.

A typical Scandi outfit includes a running line that is attached “loop-to-loop” to a variety of heads that come in different densities. Hi-speed, class V, fast sinking, slow sinking intermediate density, and floating heads are all available that can easily be attached to the running line. Large diameter “poly” leaders are preferred for these outfits.

Skagit setups are designed to sink very fast and cast large, heavy, bulky steelhead flies. Such is the need on the Skagit River where the style was originated. These setups use 32-35 foot floating or sinking heads that are attached to extremely dense sections of sinking line called T-8, T-11, and T-14. These are fly line lengths with loops of various densities that sink very fast. Leaders are usually very short and range from 4-6 feet in length.

Skagit setups tend to be easy to cast, but are not delicate in presentation. The line must be stripped in so that the head is just outside the tip before making another cast.

The Lift and Set

All Spey casts begin with a lift that breaks the surface tension of the fly line from the water and moves the end of the line to a “set” that places the anchor in the correct desired direction. A good lift allows for the anchor to be placed with control. (Tip: Focus on “Point P”. This is the point at which the line touches the water. As the point moves away, line friction is greatly reduced. Don’t stop the lift and keep it smooth.)

The anchor is the fly, leader and sometimes a portion of the fly line that is stuck to the surface of the water at the beginning of the forward “delivery” portion of the cast . Without an anchor, the line leaves the water and we make a back cast. More importantly, the anchor secures the bottom of the “D” loop which provides tension and helps the rod bend or load. The anchor should be set approximately one rod length from the caster. (Tip: Learn the “train track” principle: The anchor is always the OUTSIDE track and the path of the rod tip is always the INSIDE track. Upstream wind = upstream shoulder cast and anchor — Downstream wind = downstream shoulder and anchor. Last, make sure the “train tracks” are aimed at the target.) 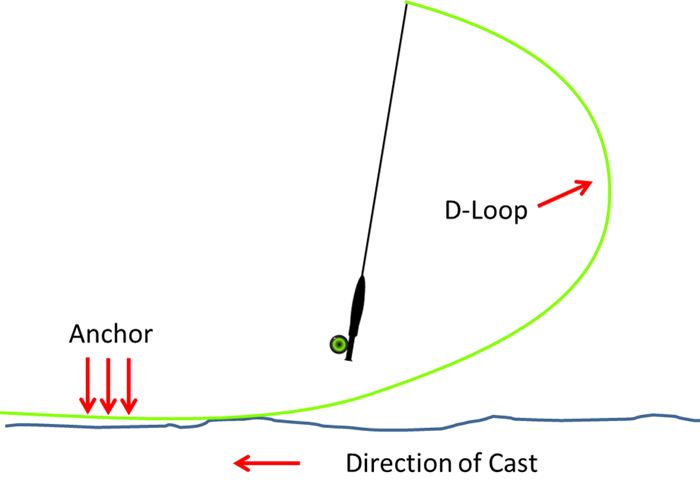 The “D” loop is a loop of line that runs from the tip of the rod behind the caster that has tension and thus allows the forward cast to bend or load the rod as it is moved forward during the cast. The “D” loop should be lined up directly in line with the intended target. (Tip: The rod tip must never dip when creating the “D” loop. It will result in slack and unload the rod. You should generate a “white mouse” as you sweep up to the firing or “key” position. The white mouse is the water spray created as the line moves around to the lift and firing position. The white mouse assures that you are loading the rod and keeping tension on the rod as you sweep.)

The forward stroke should be smooth and stop high. Remember, as with all casts, to form a tight loop, the rod tip must move in a straight path.